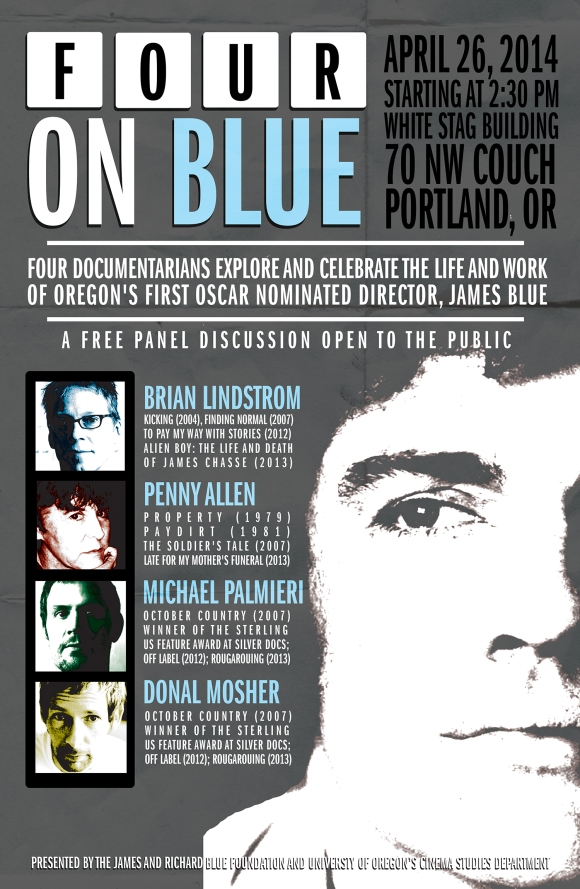 Brian Lindstrom was called away unexpectedly – his son collided with a baseball – so he was at the ER instead of the panel. (Things turned out well at the ER.)

I really hated to miss the panel. The March had a profound impact on me. I think the first time I saw it was in the early 90’s. I was struck by Blue’s moral clarity and his narrative chops. He was able to build a palpable sense of tension as the buses headed toward the march. I loved the way his cameras lingered on faces, creating patient and loving portraits. I was also deeply impressed that none of him images ever feel like “b-roll”–never feel like visual afterthoughts limping along to support narration. Instead, his is a muscular film language with each image pulling its weight. I swear you could watch the filmsilently and it would make perfect sense.

As I understand it, he was given the assignment to make the film just a few weeks before the march. Many filmmakers facing that tight of a timeline would have just followed A. Phillip Randolph and/or MLK, Jr. and told the story from a leadership perspective. But Blue showed real vision in following “the people”. I love the shots of people in the mall presumably after the march, with litter all around them, the implication being: “Now what?”

Amazing that he was able to make such a challenging film (i.e., challenging the audience: “Will we realize the promise of our constitution?”) under the auspices of USIA. I can only imagine what hell he and Rowan had to endure to maintain their artistic vision and integrity. Bless them for doing that.

As it turned out, Carl Rowan’s appearance at the beginning of The March was added after objections were raised about sending a film overseas about citizens rallying for civil rights. The decision to shoot the March On Washington, according to Chris Kovac, was made by George Stevens, Jr., James Blue’s boss at USIA.

But Brian is correct that the decision to focus on the anonymous marchers was made by Blue, no one else.

Notes On James Blue is a blog kept by Anne Richardson, of Oregon Movies, A to Z, to document her own learning curve as she attends the 2014 James Blue Tribute.

Notes On James Blue is supported by the James Blue Alliance, a 501 c3 non profit organization dedicated to preserving the legacy of filmmaker and film educator James Blue. All thoughts, opinions, and errors belong to Anne Richardson, and do not necessarily reflect those of the Alliance.